Vanenburg has grown considerably over the past year and currently consists of a team of 150+ enthusiastic and dedicated employees. Projects can be extensive and complex, and the expertise of our employees brings these projects to success. But who are the people that make all of this happen?

Ramanathan got his bachelor’s in physics in 1983 from the University of Bombay (now Mumbai). After his bachelor’s, Ramanathan started his career as a Programmer in 1983 and has traversed the multiple versions and upgrades of the Indian IT industry. His areas of work range from managing outsourcing relationships, setting up and managing global product development centres, venture incubators, and high-end technology parks, and working with start-ups, people and organization development.

He has been associated with the holding company (later known as Vanenburg Group) since 1987 and has held senior management positions in its subsidiaries like Baan, Cordys and Vanenburg IT Parks in India. He is currently an advisor to the Vanenburg board and recently celebrated his 35 years milestone.

He was Vice President and Executive Committee Member of the Hyderabad Software Enterprises Association (HYSEA) and has been active in its Software Products Forum for over 20 years. He is also the Founder and President of the Project Management Institute-Hyderabad Chapter.

What do you do on a daily basis at Vanenburg?

As an advisor, my role is not full-time. Broadly I participate in defining and implementing the strategy of the company. Defining metrics, performing business reviews, suggesting organizational improvements, and identifying risks are some of the areas I participate in. I offer my input in areas of people, products and go-to-market strategy of the company. At times, I am involved in training and internal assignments. I also offer my advice on India-specific matters involving industry practices, policies and compliance.

In 1987, you started exploring at Baan, setting up partnerships with Indian outsourcing firms for software development. How did it all start?

Partnerships with outsourcing firms were set up before I joined. The initial scope of these partnerships was to do various customisation projects for customers of our ERP products. I got introduced to Baan Company in 1987 while on an outsourcing work assignment with them in the Netherlands and was asked to join Baan later on. At the time, Baan was working with outsourcing vendors a lot.

Jan Baan came to India in ‘86, as he felt that it was a great opportunity for software development. My role then as a technical manager was to facilitate the knowledge transfer of our tools, products, standards and methodologies. I also had a role in bridging the cultural gap between Indian and Dutch colleagues. In 1988 I along with another colleague shifted to Baan Company to help start their own subsidiary in India.

In 1989, your own Baan subsidiary started in Mumbai, followed by core product development and support functions. What was the need for this subsidiary?

This was a big step taken by the company. The purpose was to have our own employees and create a culture for product development. We were one of the first to do product development from India. It was not very common for companies to invest in developing products. Most companies in India at that time were into customer projects and staffing. Having our own company enabled us to hire the right type of people, invest in a lot of training and orient them towards the entire lifecycle of products including development, implementation, support, maintenance and training.

There has been a very strong connection between the Dutch and Indian teams. This is something that we hear from everyone at Vanenburg. Can you enlighten us more about that strong connection?

Yes, we had close collaboration between our Indian and Dutch colleagues. This helped us overcome, amongst other things, the challenges of language and culture. The Netherlands is a small country with a very open culture. They are used to speaking English as a second language. Our company invested a lot in this area to bridge the gap between cultures and there was willingness from both sides. Several colleagues from the Netherlands travelled to India and vice-versa. Indian colleagues are flexible and open to travelling the world. I lived in the Netherlands on and off for more than 2 years myself! In the initial stages, this was instrumental in building trust and understanding between teams. It also laid the foundation for our rapid expansion in India in the years to come.

“Our company invested a lot in this area to bridge the gap between cultures and there was willingness from both sides.”

In 1995, Baan Company in India moved to Hyderabad. What was the reason behind this move?

We had to grow rapidly and anticipated this growth. It meant that we needed large office facilities and being in a location that offered easy access to talent and a reasonable cost of living for our employees. Hyderabad offered us all these. Mumbai was too expensive due to the high cost of living. We were one of the first companies to locate in Hyderabad, which was an upcoming tech hub and big-sized city at the time. We also received good support from the government – they were very encouraging.

Which roles and responsibilities did you have at the time?

My role was to lead this rapid growth and build the organization in Hyderabad. So I performed the role of a General Manager during this period. Where experts took the technical engineering responsibility, I had the responsibility to hire the right people. I focused mainly on hiring, training and working closely with Dutch colleagues to develop, release, support and maintain various modules of our ERP suite. We had by then (1997) made a decision to set up a large IT park in Hyderabad. I had to implement that and had to form and lead a team of experts in this area. We closely worked with the government authorities who helped us a lot in being able to expand our operations smoothly.

What made Baan Company successful compared to other companies?

I think the long-term vision of the company and the ability to identify the emerging potential of India were one of the main reasons. There are people who see and people who sense. People who sense do not necessarily see things. Some people in the mid ’80s sensed that India would become a top player in software development. While this was not very obvious to everyone, the company under the leadership of its Chairman Mr Jan Baan took its chances and was the early bird. Lots of intangibles and the combination of many factors (e.g. Mentoring of senior Dutch management staff towards Indian talent) were key for success. There were many ups and downs during this journey but we were patient, committed and made the right investments. Mr Jan Baan was and continues to be a great ambassador for India. Top management commitment is the key to success.

You started at Baan company in the ’80s and recently celebrated 35 years in Baan-related companies with Vanenburg. What sticks with you the most?

Amongst many things, the ability to make quick decisions is striking for me and I remember the speed at which the decision was made to invest in our IT park. Both Jan and Paul Baan were visiting Hyderabad in mid-1997 and while on a site visit were able to discuss and finalize our decision to invest in our IT park. The speed of decision-making was followed up equally with the speed of execution and we soon had the grand inauguration of our IT park by the Hon’ble Chief Minister of the state in 2000. This was a memorable experience for me.
Another aspect that remains with me is the strong commitment shown towards the India operations. When we started our own subsidiary in 1989, the same year the company had to go through a major reorganization and we were downsizing. It would have been easy to close down our Mumbai office but the management decided against doing so and persisted with it. This was something I learnt to appreciate in later years.

After 35 years, you are still working at Baan/Vanenburg. What do you like so much about working at Vanenburg?

Difficult to answer this question in one or few words. I think it’s a combination of factors. I had the full trust of my management and that imposed a greater sense of responsibility and ownership on me. I also saw that the company had some very talented people from whom I learnt a lot. In certain areas, we were clearly ahead of our competitors and had exceptional people. Even today I feel the organization has deep technology expertise which I do not see in many other companies. Quick decision-making, a non-hierarchical way of operating, ability to take risks are some other factors that have made my stay very engaging and challenging.

How did experiences of the last 35 years influence your view on people, business and products?

I see now that it’s clearly about people. If you have the right people and provide them with the right environment and culture they will create the best outcomes for you in terms of products and business. It’s important to manage people well and help them grow and feel respected. Everybody starts off with basic knowledge and then becomes an expert later. They need a good environment, responsibilities, respect for people and personal life, and they will need challenges to become better. People like to create things and identify themselves with their success. When we provide a challenging environment to our people and accept failures, we create a sort of deep learning and mutual respect amongst our colleagues. Ownership and initiative follow and you get better products and business.

“Even today I feel the organization has deep technology expertise which I do not see in many other companies. Quick decision-making, a non-hierarchical way of operating, ability to take risks are some other factors that have made my stay very engaging and challenging.”

Do you have any exciting projects or developments coming up?

On the professional front, I look forward to the full release of our modernization suite from Vanenburg. Our enterprise history over the past 40 years has given us unique insights into the challenges of legacy software. The creation of our products & solutions in a modernization suite is something unique and very empowering to our customers. It will accelerate their enterprise IT modernization and make them more agile and innovative to adapt to the changing and challenging business environment. 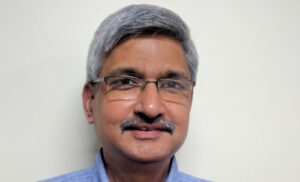